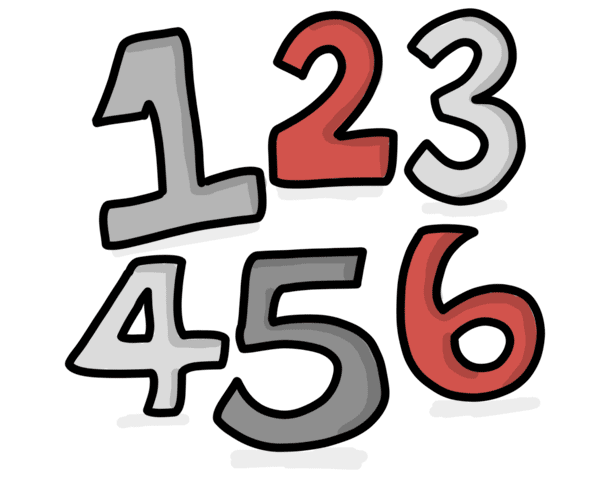 French numbers can be a bit tricky. Just when you think you've got the pattern figured out, the rules suddenly change and you're left thinking, "wait, what?"

So let's start off gently. Even if you've only been studying French half-heartedly until now, you've probably stumbled across a few of the numbers from zero to ten, so these fellas shouldn't come as too much of a shock.

(Make sure you listen to the audio. Often the pronunciation is a bit different from what you'd expect!)

If these numbers are new to you, spend a bit of time memorizing them. You'll need them to grapple with the numbers that follow!

And then once we hit twenty it's all plain sailing. All you need to remember is the word for twenty (vingt), and then just add a smaller number on the end.

The only thing to pay attention to is the number 21 (vingt et un) in which the "one" is attached like "twenty and one" as opposed to 22 (vingt-deux), 23 (vingt-trois) and so forth.

Once you've got that pattern nailed, it's pretty easy to count all the way up to the sixties. Just swap vingt for one of these numbers instead:

Things get a little curlier when you reach 70, where instead of having a word for "70" in itself, you instead say "sixty-ten", as in "sixty plus ten".

And then when you want to say "seventy one" you actually say "sixty eleven", and so on up to 79.

A little bit strange, right? It gets even stranger. When you get to eighty, instead of having a word for eighty there's a further bit of math involved. French speakers will say quatre-vingts — "four twenties".

(Note that the "et" is left out from "quatre-vingt-un". Just to mess with you a bit more!)

And then again, when you get to ninety it's similar to what we did earlier with the 70s: You take a eighty and add ten. But now we're adding it on top of those "four twenties", so to say "ninety" you're actually saying four-twenty-ten, four-twenty-eleven, four-twenty-twelve, etc.

And then there were regional differences...

If these extra options seem too much to remember right now, just stick with the French-French numbers we've discussed. Regardless of which country you visit, these numbers will always be understood, even if they're not conventionally used.

Once we get to 100 you can breathe a sigh of relief. Things get a bit more predictable.