Note: I received a free copy of this product for review purposes. Some links in this review might be affiliate programs, so I'll make some coffee money if you buy. You get it at the normal price though!

Reviewed by: The French Experiment 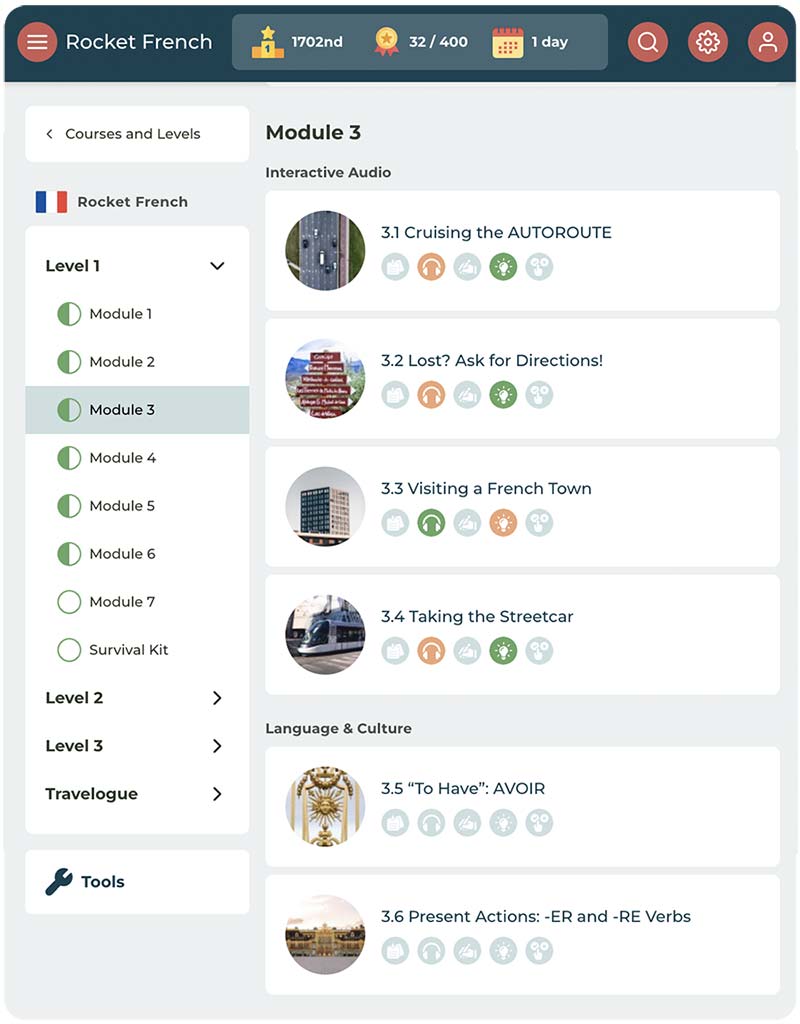 If you're really serious about learning French at home, you'll probably end up looking into the more comprehensive course at some stage. And you're going to see a lot of people singing the praises of Rocket French, by Rocket Languages.

Rocket French has been around for quite a few years now, even if it doesn't have quite the same profile as bigger players like Rosetta Stone. I first went through the course in 2008, and I've been watching the program evolve since then.

Despite being a bit less flashy than some of the competitors, Rocket French gets consistently good reviews from users.

With the 2022 release, a bunch of lessons have been rewritten and the whole interface has had a good makeover. But is it just window dressing? Is the course actually any good? Let's take a look...

P.S: It's a good idea to head over and sign up for the free trial if you haven't already. You don't need to enter a credit card, and you'll be able to understand what I'm talking about in this review. Done that? Let's go!

Generally when I hear "interactive audio course" I think "Great. They're going to make me say a useless phrase over and over again until I rage-throw my phone across the room."

These downloadable episodes follow the adventures (or often, misadventures) of our two hosts in France. Each lesson includes a conversation practice, surrounded by some educational banter between the hosts. 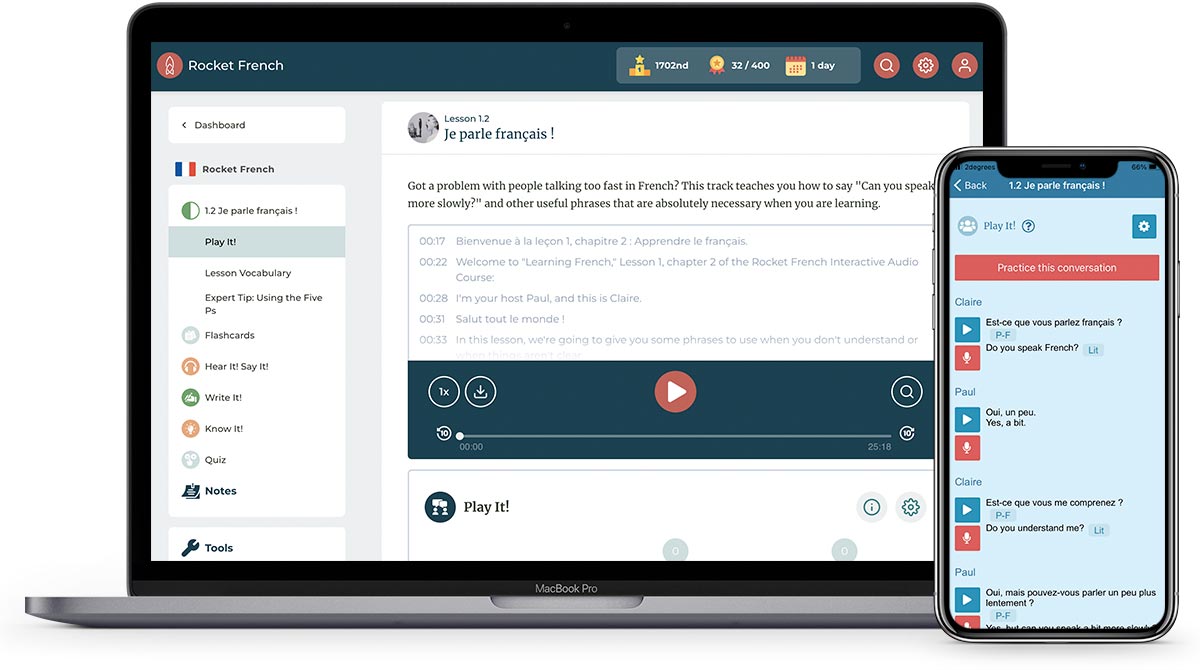 Audio lessons that are actually fun to listen to. You can download the audio to your computer or phone for offline use, and practice the conversations line-by-line too.

In Rocket French Level 1 there are 29 podcast-style lessons which you can save onto your phone or download onto your computer. Each lesson takes around 20 minutes, which was the perfect length for me to learn a little French on my walk to work.

The important thing to note is that the lessons are not just dull repetition. During the course of each lesson you'll naturally encounter a bunch of grammar and vocabulary, and the two hosts will go off on tangents and explain how this is similar to that, and why you need to be careful about that other thing.

For me, learning the grammar and vocab in context like this seems a lot easier and more natural. I was impressed at how much I learned just from these lessons, without even needing to dip into any serious grammar lessons.

I would even say that if you're looking for a quick crash-course in French to help you while traveling, these Interactive Audio lessons might be all you need.

But if you are aiming for full fluency, you'll need to dive into some grammar lessons. Luckily, Rocket French has that covered too...

The "Language and Culture" course

Yup. This is the grammar course. Rocket French calls these Language and Culture lessons, but they're mostly grammar and vocabulary — the meat and potatoes of any language course.

In Rocket French Level 1 there are 35 of these Language and Culture lessons. (In addition to those 29 Interactive Audio lessons that I mentioned above. That's 64 lessons in total.)

While the Interactive Audio lessons gently expose you to grammar and vocabulary as you come across it in a conversation, the Language and Culture lessons are more like an actual classroom French course.

For each lesson you get written notes that explain how everything works, and then a bunch of beautiful, slow, clear audio to practice with. 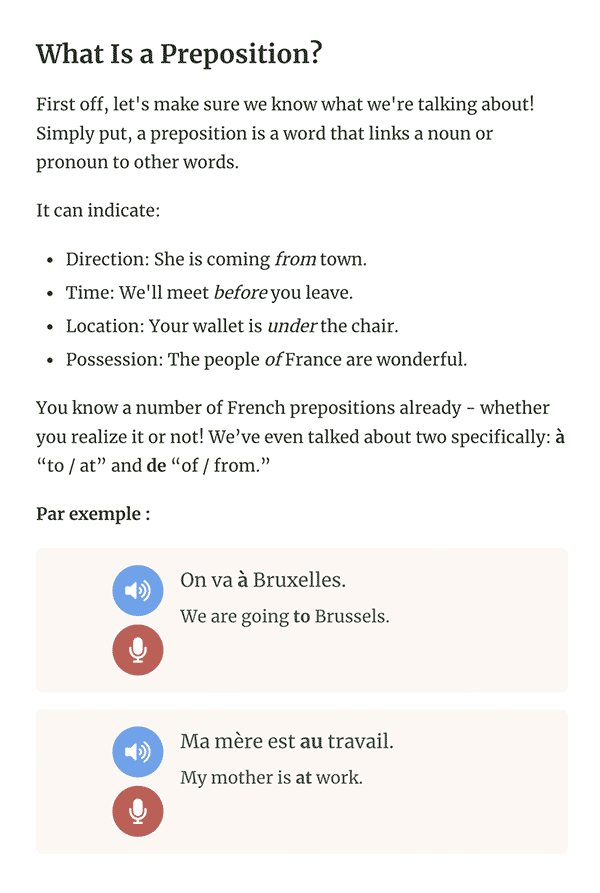 The grammar section of the course teaches you the building-blocks of French with clear explanations and audio examples.

Recently these lessons appear to have been given an overhaul — they are now a lot friendlier and more empathetic than they used to be. The writers don't assume that you already know your prepositions from your pronouns — they'll actually explain what they are and why they're important first.

For a long time this "textbookiness" has been the biggest gripe I've had with Rocket French, so it's really great to see that they've listened and made the lessons more accessible.

‍Handy hint: Rocket French lets you filter the lesson types so that you only see Interactive Audio lessons, or Language and Culture lessons. You can also hop around the course and take lessons in any order.

But I recommend sticking to the course outline and doing the lessons in order, so that you go through the Interactive Audio lessons for a module before tackling the grammar lessons in that module.

I found the audio lessons gave me a taste of the grammar, and then when I came across it in the Language and Culture lesson, it wasn't as intimidating. I'd think "Oh, I've seen you before... " and it made it easier to wrap my head around and remember.

Want to know another thing that makes things easier to remember? Hang on, this deserves its own little section...

Games and tests to reinforce your learning

Each lesson inside Rocket French comes with a collection of self-testing tools which are designed to work on all angles of fluency: Listening comprehension, speaking, translating, and being able to find the right words when you're under pressure. You also get a useful flashcard game for every module, and you can create your own flashcard sets. (This is incredibly useful.)

All these tools help reinforce the material you've just learned in a different way, so you can make sure you really know it. They're great for building confidence, and I found that my recall was much better after using them.

These would be good for older kids too.

Flash card game: How well can you translate the English into French? Rate yourself, and keep practising until you can mark them all as "easy". You can also create custom sets of flash cards for words and phrases you want to work on. Super useful.

Tell the truth. Do you ever speak your French out loud? Are you afraid that when you actually have to speak... nobody will understand you?

That's the big problem with learn-at-home French courses. When you don't have a tutor or a class to interact with, there's a good chance you won't speak your French as much as you should. And even if you do... who is going to tell you if your pronunciation is ... errrr ... less than great?

I generally recommend that you spend at least a little time speaking to actual French speakers. But for all those other times, Rocket French comes with a nifty little pronunciation perfecting tool, baked into every audio example in the course.

The Rocket Record tool can be used a couple of different ways. (One way I recommend, and the other... err... your mileage may vary.)

The tool allows you to record your voice as you pronounce words and phrases, and then play it back so you can hear yourself. This is good — you can listen to the voice artist, and then listen to yourself and spot the difference.

On top of this is the option to have the system rate your pronunciation. This is a bit less reliable.

Rocket Record: The automatic rating system isn't always the most reliable, but you can always switch it off and just use your ears.

From what I can see, it looks like it uses voice recognition (like what you have for talking to Siri / Alexa), except it is listening for French. Whatever French it hears (or mishears) is turned into text, which is then compared to the text that you're supposed to be saying. Abracadabra, you get a rating out of 100% based on how close this is.

Sounds good in theory, but in practice I found it a bit temperamental. It's always trying to match what it hears against real French words, so it's not going to be very good at pointing out if your vowels are a bit flat, or your RRR is not throaty enough. If your internet connection isn't super strong, it can miss out whole words or syllables.

You have the option to turn off the rating system inside the tool settings — this is what I've done. Now I just use my own ears to see how close I'm getting.

If you want to give it a whirl before you buy, I recommend that you sign up for a free trial first.

Another thing often missing from home-study programs is feedback, reporting, and that feeling that you're actually getting somewhere. If the nerd in you is itching to be top of the class, Rocket French has a variety of assessments built in to chart your progress.

Who is Rocket French suitable for?

I would say that Rocket French is suitable for absolute beginners through to reasonably advanced students of French. I've been looking at Level 1 in this review, but there's also a Level 2 and a Level 3 if you're ready to move beyond the basics.

In each level there's enough material here to keep you going for a long time.

So what's the final word?

You could think of Rocket French as being three products in one: The audio course, the language and culture lessons, and all the testing tools. Each one of these would be worth the cost of the course. But the fact that you get all three makes Rocket French is extremely good value for money.

I always say that there's no ONE French course that will take you all the way to fluency: You really need to use a variety of tools. But the course that comes closest to achieving the impossible is Rocket French.

It's got you covered from complete beginner up to reasonably advanced, with enough tools and teaching in each level to challenge you for a long time. It works for a variety of learning styles, and helps build all your language muscles: listening, reading, writing, speaking, and recall.

The price-point is very reasonable, and it's a one-off purchase which means no monthly subscription charges or extra costs. There's also a free trial and a 60-day money-back guarantee, so it's easy to give it a whirl.